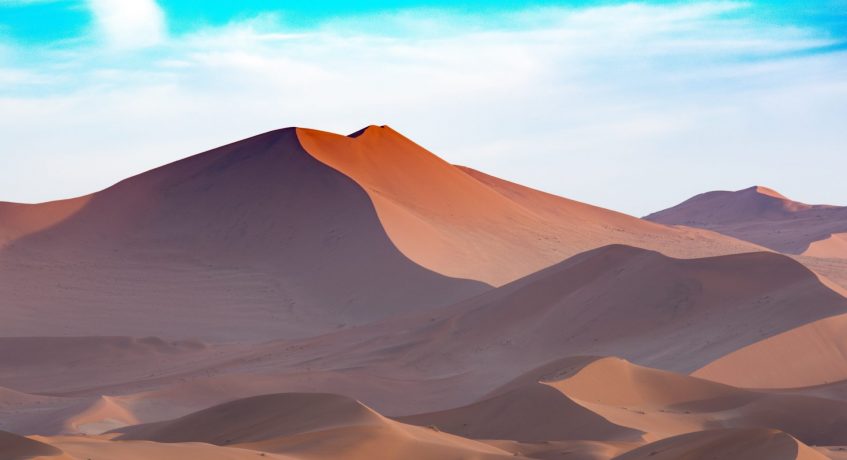 Namibia, a realm of distinguishing landmarks, diverse wildlife and unique people. Ranging from the Salt Pans of Etosha National Park to the enigmatic beauty of the Namib desert, Namibia has been blessed as a country bountiful in the department of natural wonders.

Below are just a few examples of the building blocks that make up the mystique and beauty of this land which man has yet to fully tame.

Along the border between Namibia and Angola, a series of misty waterfalls have set up shop, sharing land with the mysterious tribes of the Ovahimba Ovatjimba, Ovazemba and Ovatwe people. This ethereal beauty is spread over 1.5 KM and drops from a height of 60 metres.

The journey to this mystic sanctuary starts in the charming city of Opuwo, where you will be gifted with the beautiful sights and sounds of a country-side yet untouched by man. Bountiful baobabs and towering makalani palm trees line your path in a chaotic fashion; a sharp contrast to the organised city roads lined by street lamps you might be more used to. And if that method of conveyance is still too tame for your thirst for adventure, white-water rafting is a viable means of transport around the region.

This land is home to a number of beautiful avians and predatory wildlife. The main attractions people come to visit (apart from the falls themselves) are the sightings of the wild birds of bright colour and the serpentine crocodiles in their natural environment. You might even be lucky enough to witness a view of the mysterious Himba tribe during your holiday under the mist. 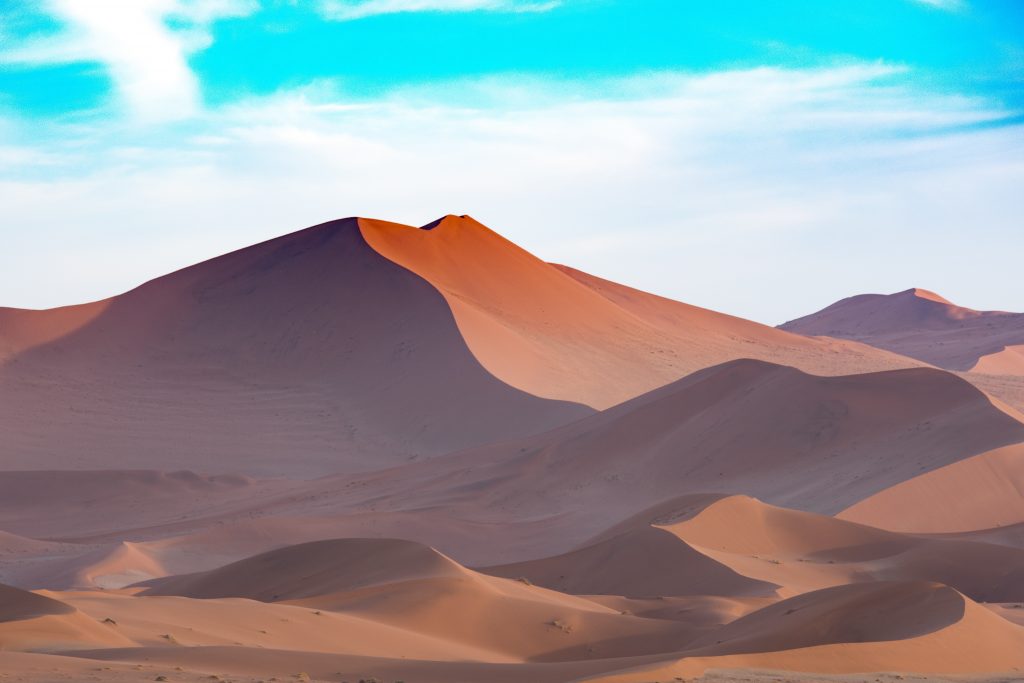 You would be forgiven for believing you had stepped into a post-apocalyptic wonderland as you walk in quiet awe among towers of sand the colour of fresh blood while traversing the bone-white salt pans in the Sossusvlei desert region.

It is home to a number of the tallest dunes on the planet, with the most grandiose of them all being affectionately called Big Daddy at a colossal height of 325 metres. But, if what you’re looking for is better photoshoot options, then you might be interested more in Dune 45 which holds itself together with five million-year-old grains of sand and the sweat of tourists for easier pictures.

Ideally, you should hire a tourist guide when you choose to explore the dunes and marshes of one of the most scenic spots in Namibia. After all, you wouldn’t want to miss out on the sites of the Deadvlei made from dead camelthorn trees, or the Petrified Dunes who have transfigured into solid rock.

Truly a land perfect for ghost stories and vacations alike. 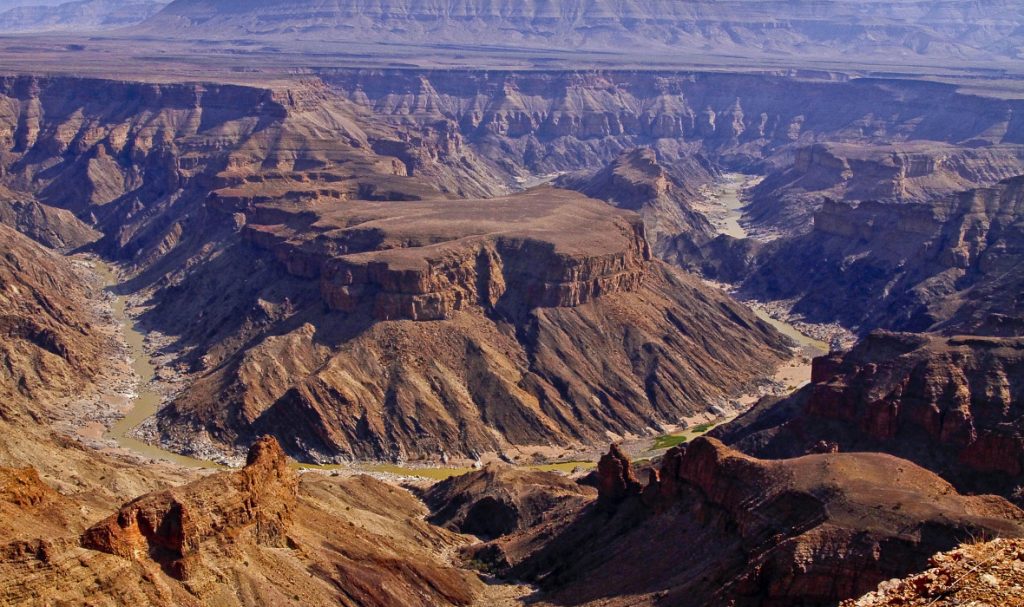 This enigmatic ravine boasts the title of the largest Canyon in Africa and the second most visited tourist spot in Namibia. 160km long and 27km wide, it plunges down to a depth of 550 metres deep, hosting a hiking trail where visitors can come to visit the longest interior river in Namibia, the Fish River, and the wide variety of wildlife that call this expanse home.

Hiking the trail of the Fish River cuts you through the dry stony plateau alongside a flowing river in the late summer region, and intermittent pools the rest of the year. You can take a refreshing dip here, or make your way further on to the lower end of the Fish River Canyon to the austere hot springs resort of the Ai-Ais, as a reward for a hike well done.

The hiking trail itself is a wonder all on its own, boasting several sights of Egyptian geese, mountain zebras, dragonflies and the famed Kalahari-Orange and Queens-Purple-Tipped butterflies. Beware though; the canyon is not without its dangers – hyenas and venomous snakes have also built a home in this realm of rocky waters.

The term ‘Skeleton Coast’ may conjure up images of joyful playground actors wearing fake eye patches and chasing children who run with their imaginations running just as wild.

The reality could not be further from the truth.

This region takes up the predominant area of the upper portion of Namibia’s coastline and requires a permit to enter the Southern region, and another more closely guarded permit to visit the Northern region, which is only given to about a thousand people per year, and only via designated tour groups.

This is to preserve the delicate ecosystem which has evolved from a series of events that have resulted in Skeleton Coast becoming a landmass of shipwrecks and sun-bleached bones – a far cry from the Disneyland-Esque imagery you might have pictured before.

A combination of unruly waters, thick fog and a landmass that allows for no settlements mean this region is littered with the carcasses of unlucky ships and stranded whales whose bones are thicker in number than the local flora. In the past, any sailor who made it off a capsized ship in time and managed to swim ashore stood no chance at survival in this wasteland and died of thirst, becoming one with nature.

Despite these living conditions, life finds a way. Skeleton Coast is home to a number of wild animals such as Rhinos, Elephants, Giraffes, Oryx and Kudu, and even a tribe of the Ovahimba people, who use the numerous Whalebones to construct sturdy huts for their own residence. Even plant life has adapted to the inhospitable conditions and relies heavily on the daily and deadly fog from the Atlantic Ocean to survive. 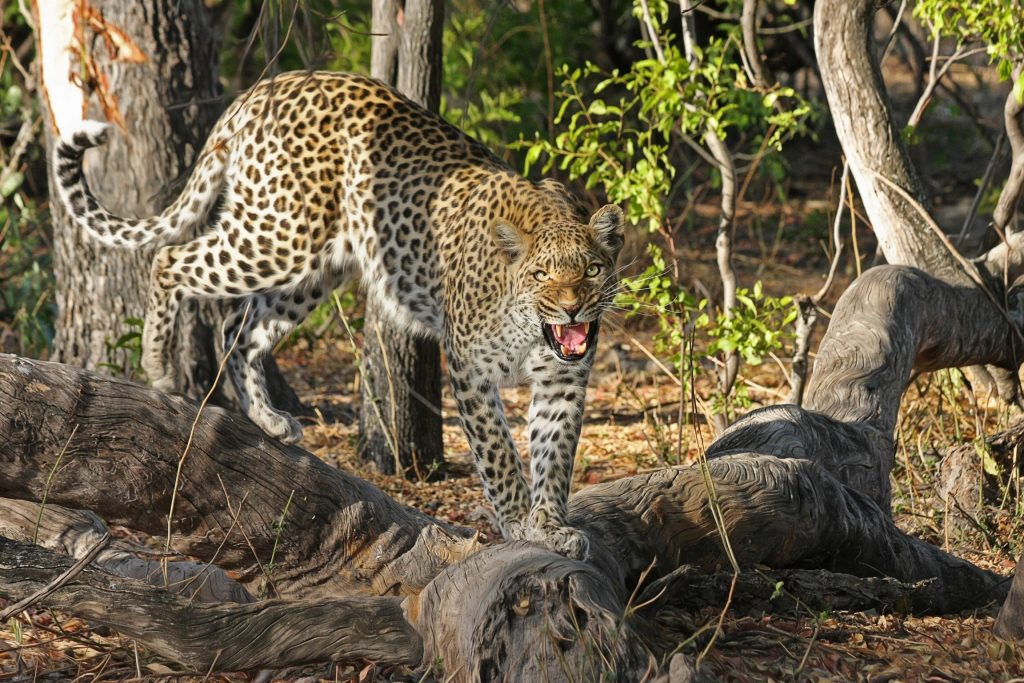 With salt pans so large they can be seen from space, and flocks of birds living in harmony with herds of animals, the Etosha National Park in Namibia is top on the list for getting up close with the creatures of Africa for your natural wonders holiday.

Etosha means “The Great White Area” in Ovambo, due to the salt pans which are home to thousands of Flamingos who migrate here and nest in the ephemeral waters every year  (“The Great Pink Area”?)

Through safaris and tours, you can witness elephants, giraffes, zebras and springbok gather en masse as they graze peacefully in massive herds together, unknowingly being stalked by sinuous leopards and regal lions.

This landscape has many unique features and species of wildlife, and several camps have created specially made photography hides near the waterholes, designed for nature and animals lovers alike. Many of the lodges have private decks and viewing platforms so you can see the wonders of Africa from the peace and comfort of your own abode. 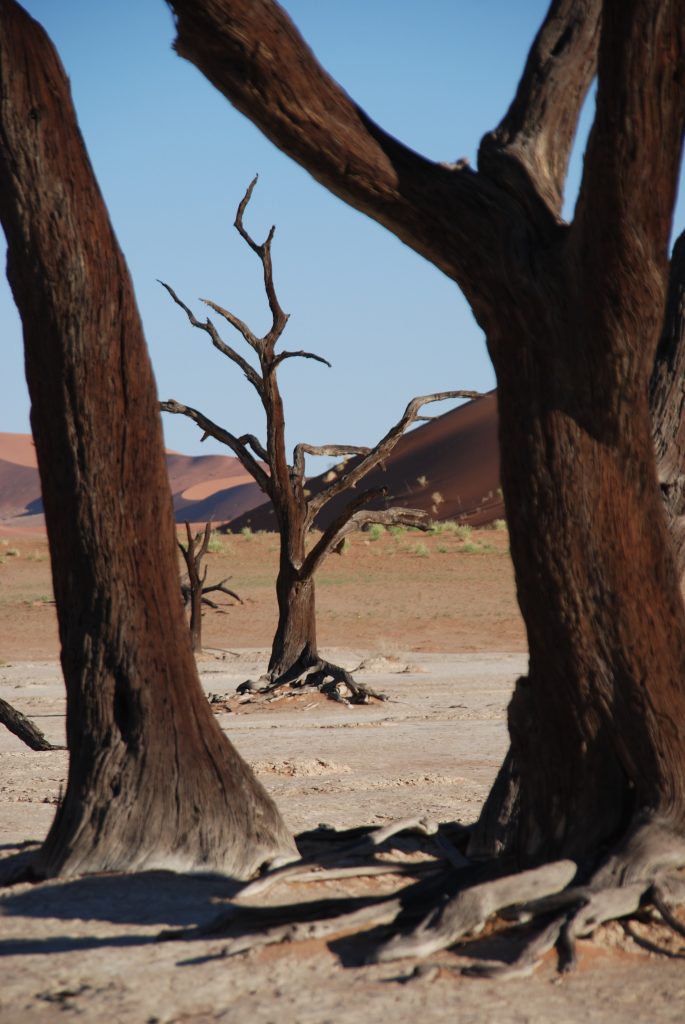 If you’re seeking a holiday that promises to deliver a combination of awe, beauty, adventure and eternal memories, then Namibia will happily provide.

Looking for package deals or accommodation? Check out our travel options here.

Bradley Laubscher
I'm just a writer, sitting in front of a laptop, trying to make this world a funnier, more easily understood, and SEO friendly place.
Previous postWhat you need to know for your trip to Africa – Ten Top Tourist Tips